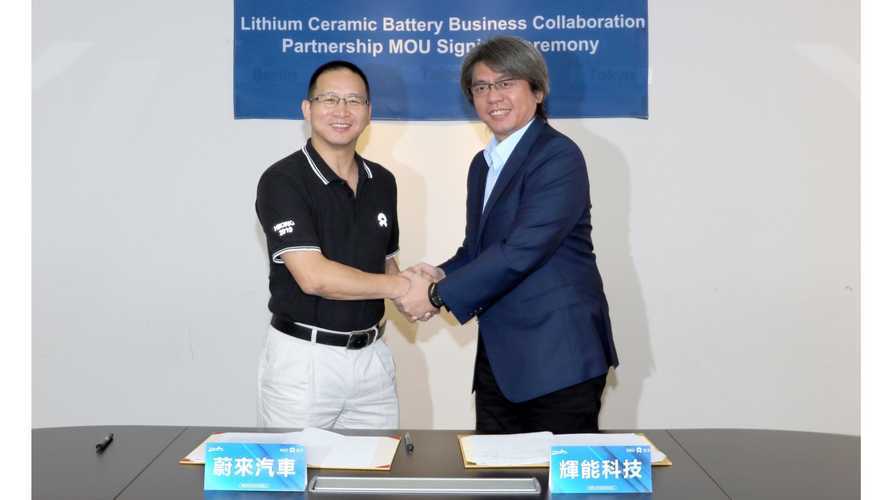 After the three­minute battery exchange and the fastest pure electric supercar, NIO is now going to revolutionize the power battery technology.

On August 22, NIO and ProLogium organized a strategic cooperation agreement signing ceremony in Taoyuan, Taiwan. Electric Power Engineering VP of NIO, Dr. Chen­Dong Huang, and CEO of ProLogium, Vincent Yang were the representatives of the two parties for signing this agreement. Both parties reached a series of consensus for setting the short­term goal as creating a prototype using ProLogium solid state battery pack. They would have more in­depth discussions with respect to the cooperation in the production of solid­state battery pack.

Domestic and foreign vehicle makers have introduced plans related to the adoption of solidstate battery for the purpose of enhancing safety and recharge mileage. NIO chose to cooperate with ProLogium due to its high degree of commercialization and the innovative battery pack construction technology developed with respect to the advantage of solid­state battery.

If solid state batteries are directly assembled as a conventional battery pack, it is just like keeping a soaring eagle in a bird case; it cannot fully exploit the advantages of solid­state battery. Therefore, ProLogium developed a brand­new packaging approach with respect to the high security, heat dissipating capability, and mechanism characteristics of solid­state battery, and created the MAB (Multi­Axis Bipolar Pack) technology. Commonly defined battery cells are nowhere to be seen in this battery pack. Instead, electrodes are directly stacked via bipolar battery technology for the serial and parallel connection. It is equipped with the heat dissipating function at the battery cell stage to save a huge amount of wires, packaging, and heat dissipating materials which cannot provide any electricity. It can simplify the design and space of battery management system, greatly enhance the efficiency of battery pack, and comprehensively strengthen the advantage of solid­state battery.

“ProLogium is at the leading position in R&D of solid­state lithium battery technology. Solidstate battery is safer with higher energy density, so it will become the mainstream form of battery product to be used by smart electric vehicles in the future. NIO will embrace the upgrade of battery technology and constantly enhance the experience of smart electric vehicle users,” said by Electric Power Engineering VP of NIO, Dr. Chen­Dong Huang.

“ ProLogium has always been pursuing the front­end technology with high efficiency and industrialization prospect. Currently it will take another 10 years for the state­of­the­art battery cell technology to catch up with the mileage requirement on the market. In order to take care of the stability and cost of both battery cell, we do not blindly adopt the high activity positive and negative electrode materials with immature supply chain, small amount of shipment, and high price to boost the battery cell energy. Instead, we propose a method for simultaneously enhance “Battery cell energy density” and “Battery pack efficiency” to invent MAB (Multi­Axis Bipolar Pack) technology to meet the market expectation right now. ProLogium team is very excited about being recognized by a partner filled with innovation energy like NIO, and the expectation is that both parties can achieve good technology exchange during the coming battery verification and R&D cooperation. By combining NIO’s deep development capability of “Battery­Motor­Controller” system and ProLogium’s accumulated technologies in the field of solid­state battery, we can create a brand new, or even optimized MAB Multi­Axis Bipolar Pack to bring the truly safe and highly efficient new energy vehicle to the market,” pointed out by CEO of ProLogium, Vincent Yang.